No vote on Graham-Cassidy 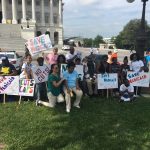 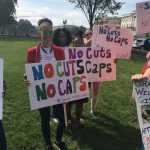 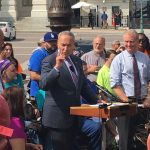 Just minutes after a Rally and Press Conference outside of the US Senate, GOP leadership has decided to postpone its pursuit of the Graham-Cassidy health care bill designed to repeal the ACA.  With three confirmed votes against the bill (Sens. Paul, McCain and Collins) and another “no” vote on the horizon (Sen. Cruz) in spite of leadership meeting at noon, Republicans have pulled the bill…for now.  Republicans had been trying to initiate an ACA repeal by this Saturday, Sept. 30, the expiration date of special Senate rules that would allow an ACA repeal to be done with a simple majority. After 9/30/17, it will take 60 votes and the cooperation of Democrats to mount a significant change to repeal the ACA.

Thank you to Individual Advocacy Group who came out in force for the Rally/Press Conference.  Medicaid supports will continue to exist for persons supported by DC Coalition provider members.